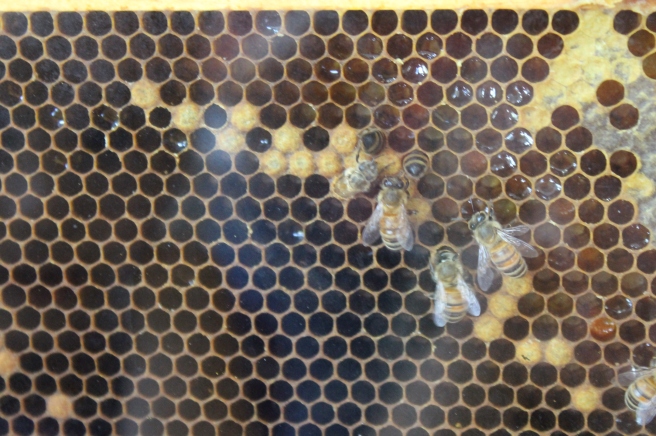 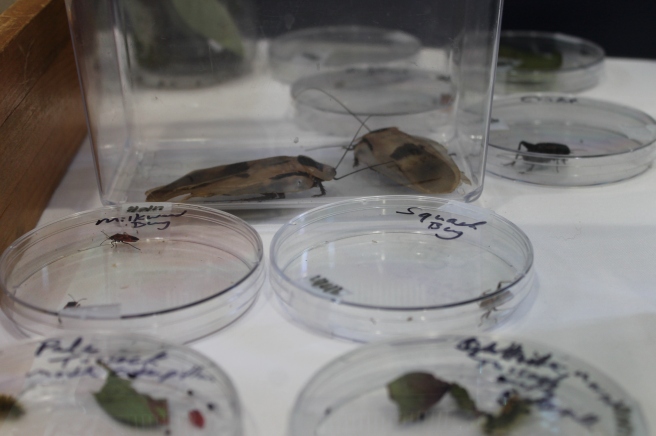 Bugs. Truly, I am not a fan. They give me the willies, even as I appreciate how interesting they are. I did my best to hide my revulsion (though I’m not sure I was entirely successful) as we took the girls to Bug Maine-ia, a free event all about bugs at the Maine State Museum. There were dead crawlies, mounted fancily. There were live crawlies in petri dishes and aquariums. There was even food made from crawlies (the girls liked the cricket chips, but only daddy would try the chili lime crickets – they still looked like bugs!). We oohed and aahed over the moths and butterflies, listened enraptured to the storyteller and puppeteer, and gaped open-mouthed as a new honeybee emerged from its cell in the glass-walled hive (mama’s favorite part).

Two weeks ago we welcomed a pair of male barn cats from a local-ish rescue to our little homestead – one orange, one black. Swee quickly named one Pumpkin, and declared that the second name had to be something spooky (since they are Halloween cats, of course) and so he became Poe. We kept them confined for two weeks, as instructed, giving them plenty of kibble and fresh water, and bribing them with leftover chicken and canned food. This past weekend, we let them out of their cubby with the hope that they’d stick around. We haven’t seen them since, though a paper plate of wet food set out last night was licked clean by this morning, and a makeshift litter box was swept together in the loose dirt of the shed floor. It would seem that they’re still here, somewhere. Fingers crossed they become a little more social. 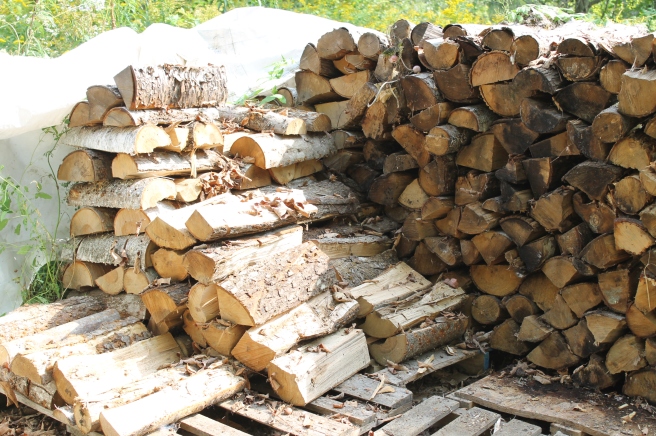 Winter is coming. We’ve begun to stockpile firewood for the colder months and hope to heat the house with only the living room woodstove. J has been scouring the For Sale posts for good deals and filling the basement with seasoned lengths. We received a housewarming gift of almost a full cord, a hugely thoughtful gesture, and I was able to help him load and unload every piece – what a workout! We haven’t had a frost yet, but it won’t be long now, I don’t think.

The “baby” chickens are all grown up, and should be laying any time now. Pocket and Pretty Boy have become quite handsome, and are very attentive to their two little ladies, if not gentle. They squawk terribly when separated from the girls, but really give them a vicious peck when reunited. None of the four little ones mingle with the bigger girls, but there’s no open hostility, so I suppose it’s alright. We need to finish covering a portion of their run to protect the space from the snow. I’ve begun to think about how to keep them all happy over the winter, and noticed this weekend that it’s almost time to bring the sunflower heads inside to dry. About half of the blooms have faded and dropped their petals, so I’ll cover them with paper lunchbags shortly as protection from the birds and rodents. When they’re mostly dry, I’ll clip the stems and hang them inside to finish drying. They make a great boredom buster for the chickens when there’s nothing around to peck at but snow. 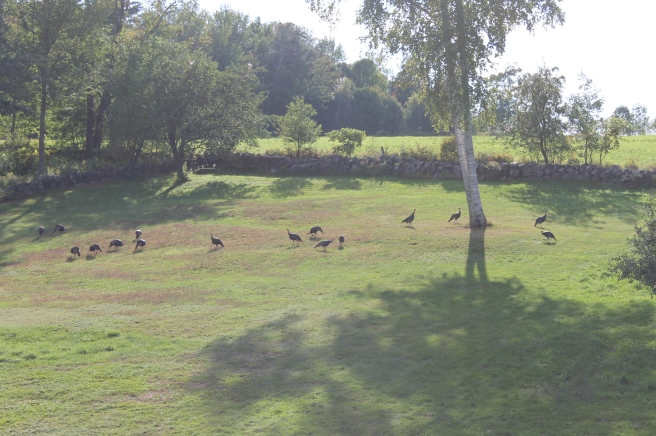 The final farmer’s market of the season was filled with pumpkins and squash, and our yard has regularly been filled with wild turkeys. We counted eighteen the other afternoon, bold as brass, marching through the orchard and up the hill. The apples are almost all ready, and I made our first pie this weekend. I have no idea what variety I used, but they made a delightfully tart filling, the kind that keeps you awake rather than being cloyingly sweet. Really nice.

And that’s what’s happening in our little corner of the world. What are you up to these days?

#hoiseedswap 2020! Starla @mistymeadowshomestead did such a nice job collecting all of our contributions and then distributing them. I’ve got a ton of new seeds, including some new-to-me varieties. We’ve still got about 14 weeks til our last frost date, which sounds like an eternity. Time to pull everything out and start planning! 🌱 Thanks to my #homesteadersofinstagram friends for their seeds! #minihomestead #growyourown @janamstrain @little_yellow_bird_garden @girl_cats_flowers @brooke_meade01 @elizpmcphee @stevenshomestead @asformeandmyhomestead @calveyhomestead @welcome_to_my_ranch @promisedhavenhomestead @inthetrough @thecuckoosnestpdx
A Saturday evening “out” for some live music. #sandyriverramblers #februaryfrolix
-12F (-24C) in our little hollow this morning. Either I missed an egg last evening at bedtime or someone laid in the wee hours of the morning - it’s frozen solid. The new coop is pretty well insulated, so we haven’t had much issue unless the gooney-birds lay on the floor. I’ll be heading out to take the goats fresh water in a bit, but first, breakfast. #frozen #frozeneggs #backyardchickens #minihomestead
Happy 153rd Birthday, Laura Ingalls Wilder! 💛 We’ve been reading the Little House books as the basis of our @thepeacefulpress Playful Pioneers curriculum, and often speak of Mary and Laura as we would friends - which they have certainly become! So it felt natural to bake a spice cake and sing to Laura on her special day. And we found a great video of a fiddler playing Pop Goes the Weasel, just as Pa did on Laura’s 5th birthday in the big woods of Wisconsin. #thisishomeschool #littlehouseinthebigwoods #lauraingallswilder
Introducing Cookie and Raspberry, the newest residents on our #minihomestead - they’re Nigerian dwarf goats, and they came to us a week ago tomorrow from some local friends. They seem to be settling in nicely! And peep that hay feeder @cavjoshh built for them - without plans. 🤯 He looked at a Pinterest photo and just went with it! Amazing. #goatygirls #cookieandraspberry #nigeriandwarfgoat
My third @sipsby box! Four brand new teas, chosen just for me based on my tea profile, including a caffeine-free chicory (it tastes like coffee!). The tulsi green tea is great too - with and without @brittneyfairfield honey! 🍯 (you can get 50% off your first Sips By Box with code SIPS50). #sipsbybox #sipsby #hersipsbydec #ambsipsby #ambcollab #teasubscriptionbox #teagift #tealover #teatime #hygge #cozyhome #teaparty #tealove #tealife #cuppatea #subscriptionbox #bestgift #giftlist #wishlist #santabringme #christmasgiftideas #giftideas

these are affiliate links. clicking helps support our blog at no cost to you. thank you!