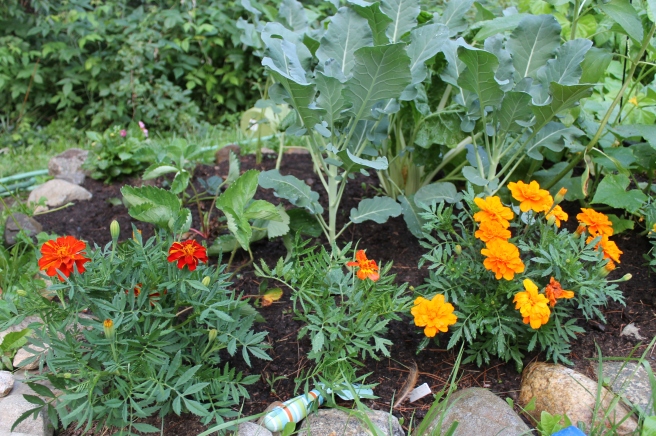 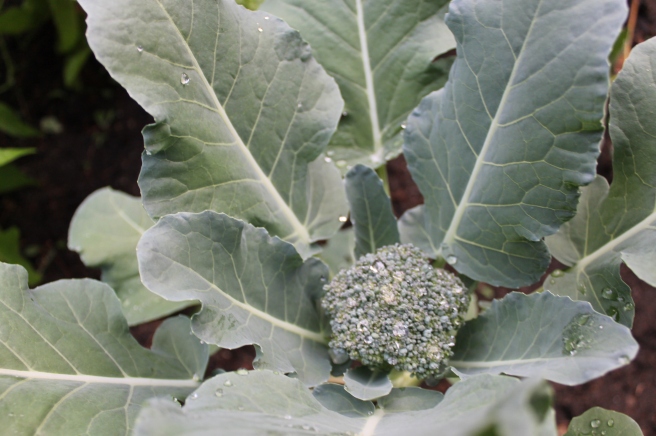 The pumpkins are taking over our sitting area. They have tumbled almost completely out of the raised bed, and are creeping towards our chairs and gliders. Huge yellow-gold flowers are in varying stages of openness, and below each one is a round, green mini-pumpkin. The cucumber vines are similarly flowering, smaller lemon-yellow blossoms hiding beneath the canopy of leaves. Broccoli looks like broccoli now, a fact that tickles Beanie’s funny bone whenever she peeks inside the leaves.

We’re not harvesting anything right now. The chard and strawberries are done, and the tomatoes aren’t anywhere near ready. I overheard another gardener at yoga the other night, bemoaning the slow season, so I don’t believe it’s just my small patch that’s lagging behind the calendar. 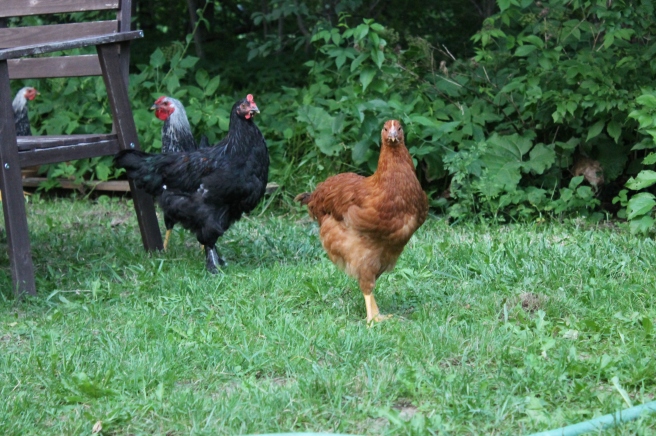 Our chickens will be thirteen weeks old this coming Sunday, and are allowed to free-range the yard in the evenings. We let them out when the girls go to bed and they wander around our ankles as we unwind by the fire. Tonight they joined me as I read, pecking at the dandelions underneath the glider. Only Pinky has been bold enough to investigate the veggie patch so far. Dottie is the biggest, and at the top of the pecking order. She seems to be something of a barnyard mutt with crazy coloring and fuzzy feet.

Pansy and Petunia, the Silver-Laced Wyandottes, are referred to as “the twins” because for a long time, only I could tell them apart. You can see, however, that Pansy has developed a substantial wattle, very distinct from her sister. She has also taken to making noise in the morning, a sound very much akin to a rubber chicken. We are wondering if perhaps she will soon be “the chicken formerly known as Pansy,” requiring a more masculine moniker. We shall see. 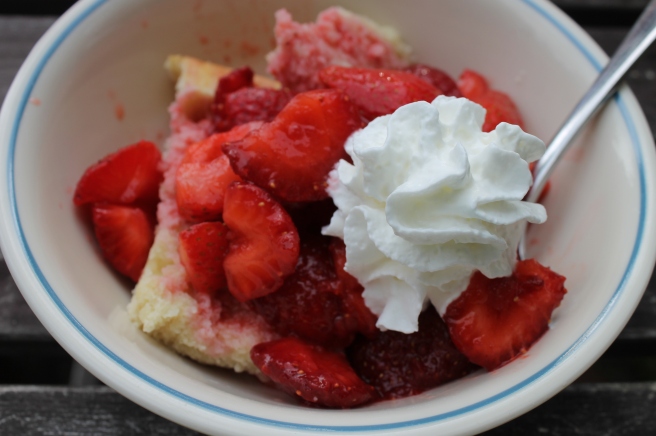 We acquired two cast iron skillets, so some re-seasoning is on the list as my next project. Beanie and I foraged some black raspberries last week, and my little helper helped herself to several tremendous mouthfuls. With a scant cupful leftover, I tried Molly’s puff pancake. I enjoyed it, which is good because I ate it for breakfast and lunch since no one else did. Some of those strawberries we picked were plunked onto homemade shortcake one evening. I managed to freeze a few, but most of them got gobbled right up. I’m hoping to sneak out early one of these mornings to pick raspberries up the road. 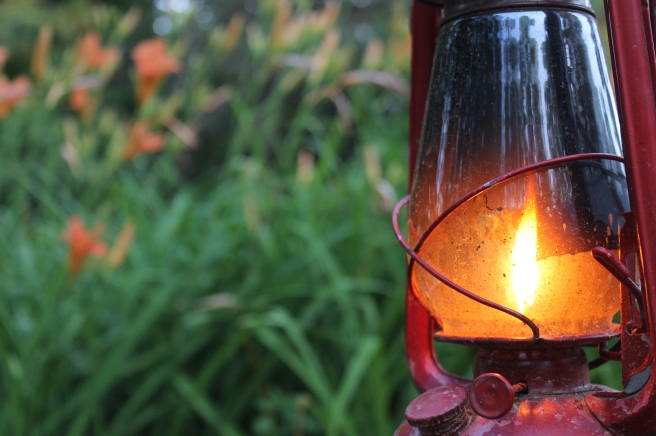 I’m enjoying the cool evenings, even more because I am not enjoying the heat of the late afternoons. I shouldn’t complain because soon the snow will fly, but for now, I’m happy to light the lantern and relax in a hoodie with a good book and my chickens.

these are affiliate links. clicking helps support our blog at no cost to you. thank you!